January has really packed an unexpected punch and with a bunch of winter ailments keeping us in quarantine, I’ve had zero time for fun things like writing a craft blog. But I finally found an hour to round up some photos and links to a few things I am super into this month, and thought you might like to hear about too.

1. Mr. Extreme Craft himself, Garth Johnson, is in Portland this week to give a CraftPerspectives Lecture titled “Waste of Timelessness: Craft in the Present Tense.” It’s this Saturday at 2 pm at the Museum of Contemporary Craft. 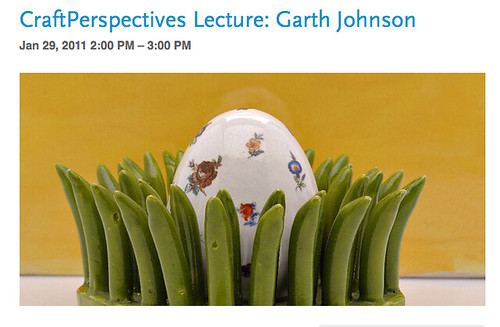 His show at the museum, Era Messages, also opens on Thursday, and the premise is very intriguing: “This exhibition seeks to examine work that is timely rather than timeless – craft that is evocative of its era rather than existing in the netherworld of timelessness.” Cool. I hope to see you there!

2. I went to Mary Adams’ book signing for The Party Dress Book last week at Powell’s, which was awesome and inspiring – just like her book. 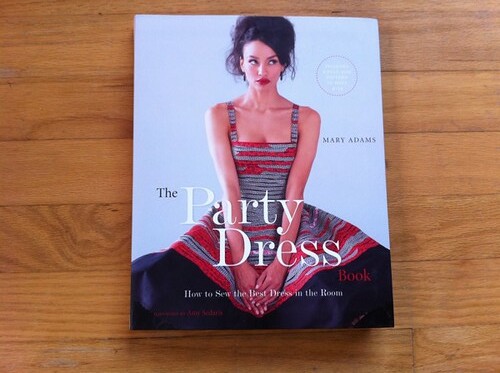 I am so looking forward to sewing myself a fancy extra-customized party dress with her embellishment ideas and pattern (hopefully by this summer?). 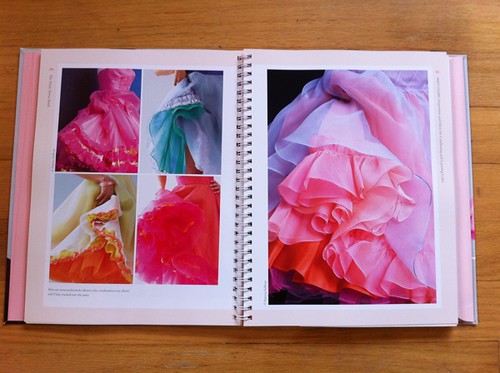 Mary took questions about her fascinating career designing party dresses, favorite projects throughout, working with Amy Sedaris, and her former life in Portland (she used to rent a studio by the Burnside Bridge for $33 a month!). 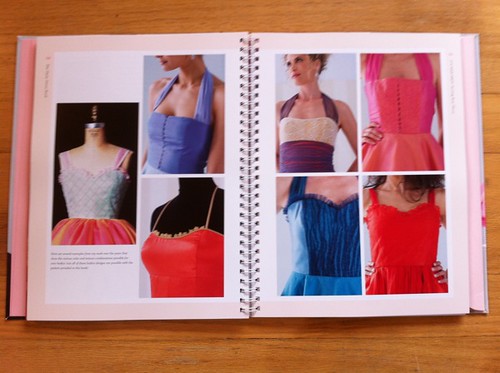 She was also kind enough to give me a few tips on adapting the top of her iconic party dress to have a different neckline. On another note, it was a lovely excuse to wear a party dress in January, and bring Everett to his first book event!

3. I mentioned a few of my New Year’s resolutions the other week and I have some good updates on a couple of them! One was to plan dinners in advance so I would enjoy cooking more. 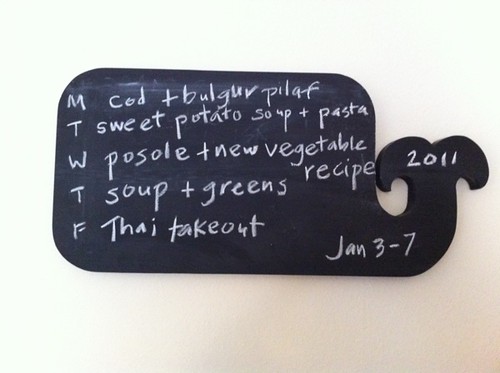 So far, we are 3.5 for 4, thanks to the trusty whale chalkboard Kayte gave us last year… it’s been really fun deciding what to have, writing it all up on the whale, and looking forward to it. 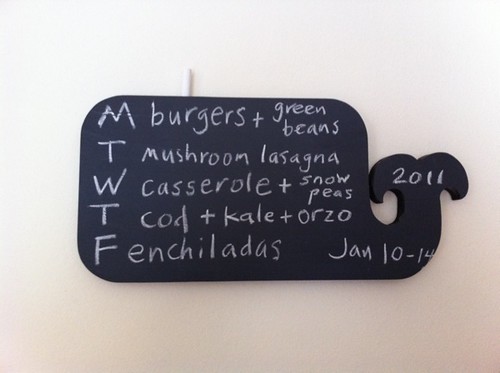 I promise I won’t turn this into exclusively a whale chalkboard menu-planning blog, but if you are interested I made a flickr set for my weekly photos over here. 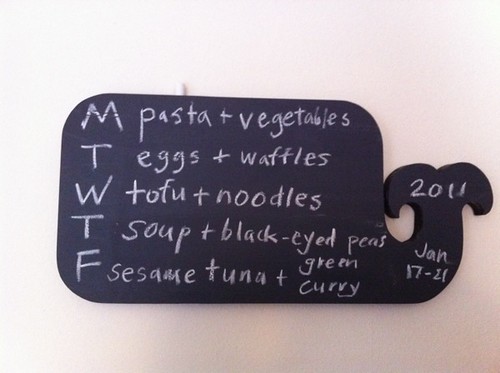 I highly recommend this method of menu planning if you are interested. 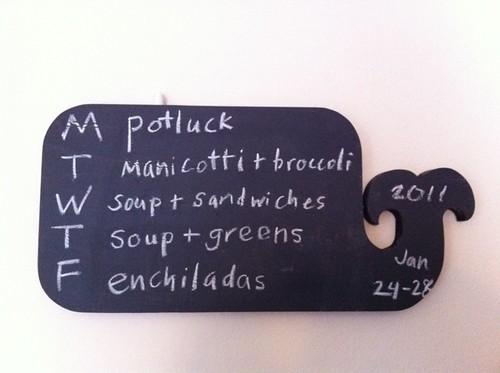 4. Another of my New Year’s resolutions is to keep an organized craft project basket handy, so when I do have a few minutes to make or mend something, there it is. I LOVE this one and it has improved my crafting life a ton. My first project was to reinforce the basket handle, which split long ago. I cut away the broken leather casing on one end and secured the unraveling straw. Then I covered the whole thing with wide orange bias tape, stitching it in place at the ends, and it’s held up awesome. 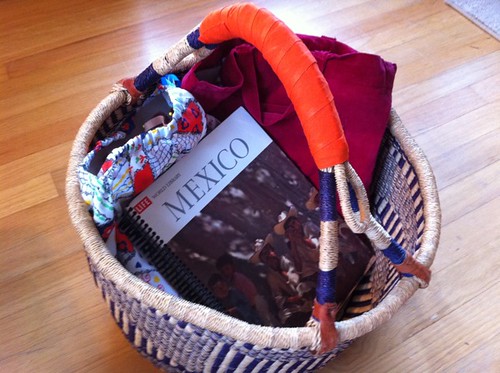 Another thing I really needed to do, considering how little my kids are, is ditch the ziploc bags I used to stick projects-in-progress in and keep things like that far out of their reach. 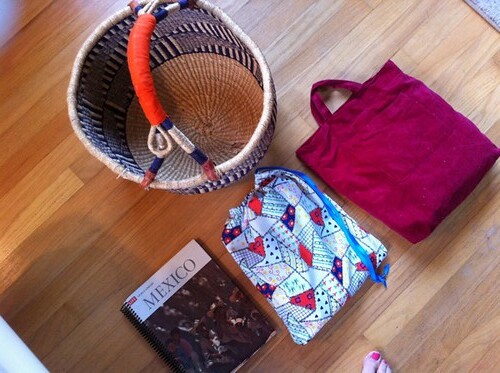 So I’m using a corduroy tote bag my grandmother made and a super-simple new drawstring bag I sewed the other week to hold the various things I’m working on, instead of the plastic bags. I also have my craft project journal handy for keeping swatches or notes close by – love that thing. 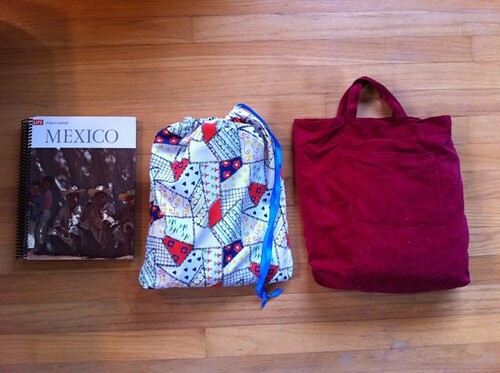 Since I put this basket together three weeks ago, I have mended two pillows, sewed the first drawstring project bag and pinned three more in different sizes, started a new cross-stitch project, and gotten some embellishment work done on my Blazers-inspired project for Clifton Burt’s BOOMSHAKALAKA show I’m in next month at the Land Gallery!

5. My neighborhood is hosting the Division Dining + Clinton Cuisine restaurant passport contest again, and I have gotten four stamps so far just walking around getting coffee or treats. The more stamps you get (6 or 9), the more chances you have to win gift certificates and other nice prizes. If you’re in Southeast often you might want to pick up a passport and get started too – you can get one at any of the restaurants on the card. 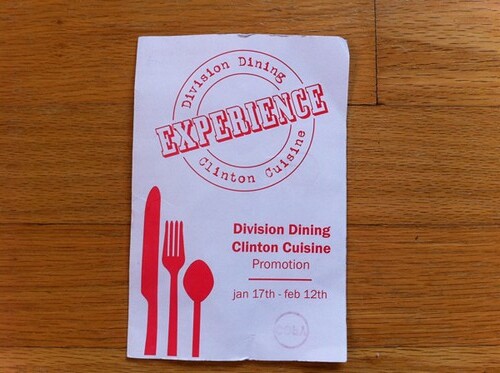 Everett and I met up with Caitlin and Arlo yesterday for happy hour at the Press Club and earned my favorite stamp yet! The passport is good through February 12 and we’ll find out if we won anything a few days later. Fingers crossed… 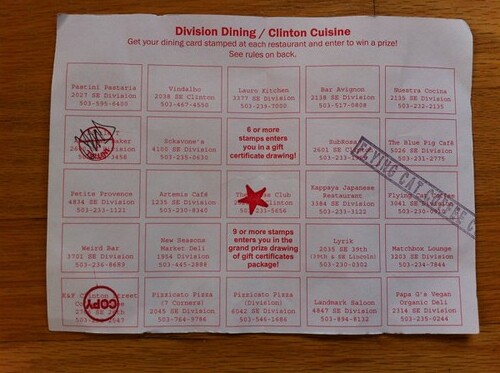 Ok, more crafty news coming soon! Hope January has been good to you so far.