I haven’t had a chance to sew, or really do any crafts, with Pearl in tow 24/7 (besides lots of cooking, which I’ve been pretty obsessed with) but last week a tiny window of time opened and I jumped at the chance to make something! Last year, when she turned one, I pieced two little birthday quilt blocks, playing around with fabric from her curtains for the centers, and some favorite prints from her happy birthday pennants for the logs. 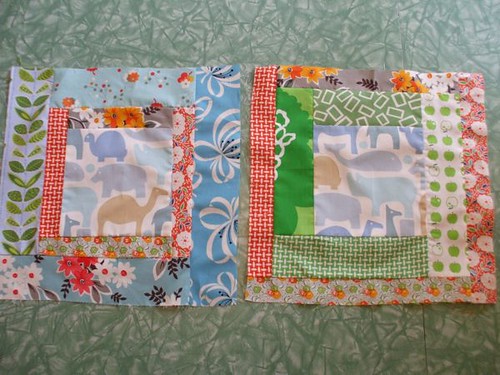 I’m making her one for every year, mixing in her favorite things (the one for this year, still not finished, is all blue — her go-to at age two), and then when she’s big and there are lots of blocks, I’m going to turn it into a birthday quilt for her. But for this first round, I had that handy extra one to play with, and thought I’d make it into a pillow cover some day. 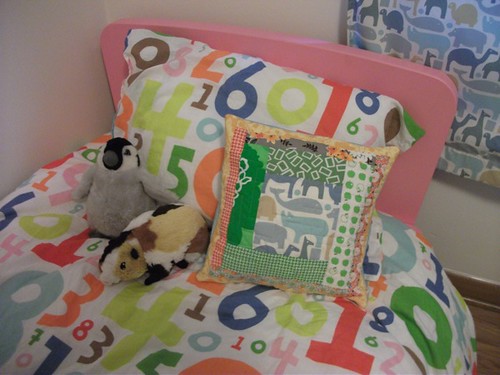 Well, last week, Pearl traded in her crib for a real big girl bed, and I thought a new pillow would be just the thing to mark such an exciting change! So I added a last tier of fabric strips to give it a little more size (a cheerful orange print I got at Cool Cottons recently with keys and leaves mixed in) and quilted it using a new-to-me technique I picked up at Elizabeth Hartman‘s fantastic Freestyle Machine Quilting class this summer – the etch-a-sketch! 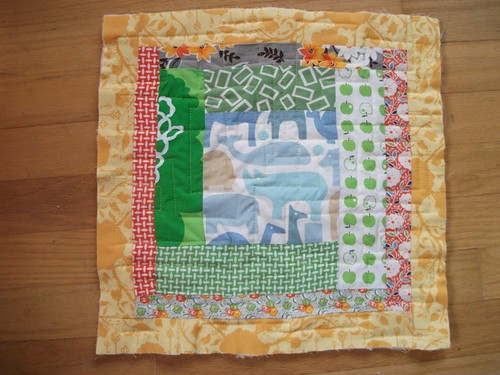 In class, we tried all kinds of machine quilting without marking the lines, and I fell in love with this improvised corners-and-squares stitching that felt so natural to me as I went along, especially paired with my beloved all-angles log cabin piecing. Halfway through my practice block, it came to me that this felt exactly like hanging out with an Etch-a-Sketch as a kid, and carefully filling the whole screen with your design – no rules except keep going! I loved the loopy, meandering curvy quilting we worked on too, but there is something so nice about simple, cool straight lines and quilting with a regular old presser foot. (My machine has a walking foot contraption built in to adapt to the one you’re already using, which is sooo nice for quilting, but I still don’t have a free-motion foot… soon, I hope.) 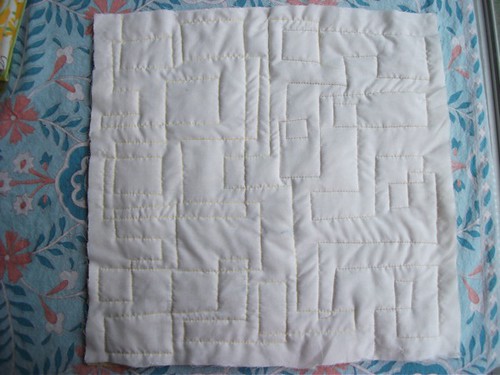 So for this block, the lines just told me where they wanted me to go as I filled in the space. I would have done the whole thing in one stitching swoop, but my bobbin ran out (you can see the thread color changed a bit on the left as compared to the right!). I let it go wonky here and there, but mostly did pretty sharp 90-degree angle turns and lots of little doubling-back squares which are my favorites. 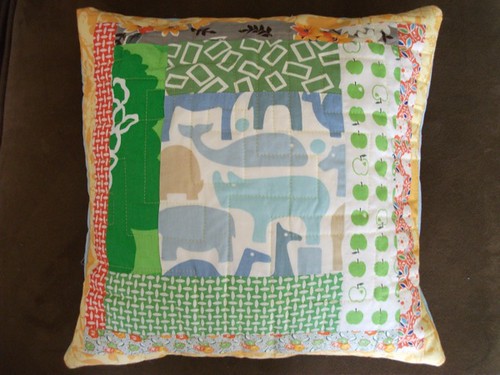 So here it is finished up with a light-blue envelope backing! This is my favorite thing I’ve made in so long, what with the crafting drought dragging on and everything. Pearl’s eyes lit up when she saw it and she hugged it close, which is a very nice compliment too. And I finally have something new to bring to the Portland Modern Quilt Guild meeting, which is tonight!

Hope to see you there…

And Elizabeth is teaching another round of her wonderful class if you want to jump in, too!

the return of Yoda adventures in freezer jam