(Hi! This post has taken me a month to start and a week to finish, so hopefully that explains all the July and August talk.)

I have always wanted to make my own jam — my grandmother canned everything, and one of my favorite childhood memories is seeing the rows and rows of glossy Mason jars full of nice things at her house every fall. I was a little (ok, very) nervous about screwing up hot water baths and pressure canning on my very first solo try, so I thought I would start with the simplest project on the spectrum: freezer jam, using some of the gorgeous berries my neighbor brought us this summer. 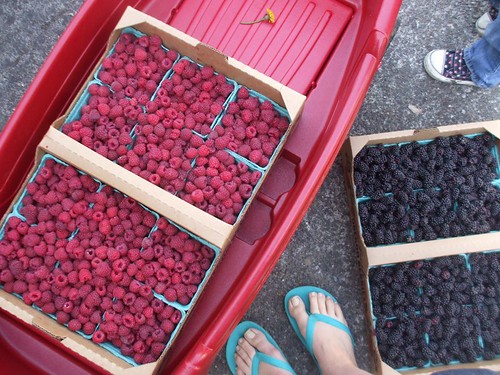 I had a sad anniversary on the horizon this summer (July 30 was twenty years since my dad died), and jam seemed like a nice thing to try making on what felt like it could be a hard and jarring day. So Pearl and I bought a dozen pint and a dozen half-pint jars, a mega bag of sugar, and some packs of Sure-Jell all on sale at Fred Meyer, found BPA-free lids and rings at Mirador, and I set a few pints of marionberries and raspberries from our haul aside for the big experiment. 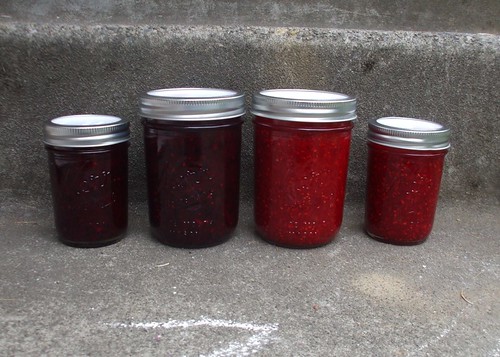 I started my first batch of five half-pints of raspberry-vanilla jam, using this recipe, at 9 am, and had sealed the last jar by 9:30. The red looked so pretty! I took Pearl to OMSI for the rest of the morning, came home, and started batch #2 (marionberry) while getting another round of raspberries ready to go as well. By the time we picked Andrew up from the airport that evening, I had finished four batches: two pints and six half-pints each of raspberry (on the right in the photo above) and marionberry (on the left). I have to say that it was one of the easiest July 30ths I’ve made it through in twenty years and I have this really lovely project to thank for it. 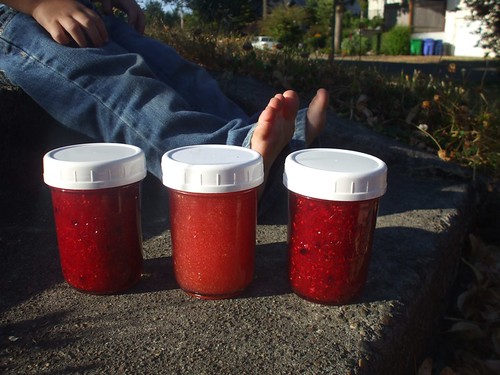 Then, after we got back from Seattle, our fig tree started producing big time. We could barely keep up with it picking twice a day, and had friends come by to take as much as they could carry away too. So along with eating some here and there and freezing them by the millions, I decided to try making fig jam too. This time I made two kinds as well: first, a batch of fig-lemon-vanilla jam, and then a larger batch of raspberry-marionberry-fig, too. I ended up with two pints and one half-pint of the fig version (the center jar in the photo), and one pint and five half-pints of the berry-fig version (the two on either side of it). Those all mixed up beautifully and I think they look so pretty in the jar. The hybrid batch is my favorite of all four.

Here are my jam tips, if you want them:

•First, the recipe I used works great with frozen berries (which, since I’m posting this a month-plus after the first time I made it when berries were in season, might be just the thing for anyone looking to get started now). Just let them thaw and prepare them just as you would fresh ones. I used fresh berries for my first round, and frozen for the second.

•Standard canning lids have BPA in the lining. I do my best to avoid it and was happy to get a tip from my friend Rebecca that Mirador carries BPA-free Tattler brand rubber rings and lids in both wide and regular sizes. These are reusable instead of disposable, and also work beautifully for “real” canning/processing. For my second batch, I found Ball brand BPA-free all-in-one lids at Fred Meyer, also in both sizes. These lids are also reusable, but they do not work for “real” canning/processing but are perfect for freezer jam, salsa, or other quick-preserving methods. (I can’t find a direct link to the Ball lids, which is so annoying, but I’ll come back and add a photo of the boxes. You can see the Tattler lids in the first jam photo, and the Ball lids in the second one.)

•Measure everything carefully and use the exact amounts/ratio called for, just like the recipe says to. My first batch didn’t set quite as well as the next six and I think trying to be quick about the berries and sugar (while keeping an eye on Pearl) was the culprit. It still tastes really good but is a bit more like a jam-syrup hybrid. The others are all satisfyingly set.

Anyway, it’s a nice feeling to have a jar of jam in the refrigerator and a couple dozen more in the freezer that will hopefully last us through most of the winter. I also have tons of berries frozen for baking and more jam if we run out! Pearl loves having jam on her toast and muffins every day (also, she eats it right out of the jar if I don’t move it away fast enough) and proudly tells everyone that we made it ourselves.

This sweet and informative post by Erin really encouraged me to try freezer jam. (Thanks!)

Meredith has been my canning hero for years, and she just posted this great article on canning over at Tiny Choices. Next year I’m hoping to try real canning and I bookmarked all her helpful resources for that endeavor.

p.s. I got a new computer (yay) and finally got a couple hundred photos off my camera so I can finally post about some more stuff I’ve been doing lately! My beloved 2007 MacBook was just full to the brim so I pretty much had to delete something every time I wanted to add more photos or anything else big. So I will post about a few new craft adventures ASAP, hopefully more like a week instead of a month behind as I catch up… see you soon!