Home / chatty / a long walk and some soup

Our household is still collectively a bit under the weather so the non-essentials have fallen by the wayside this week. But this afternoon was so beautiful in a low-key fall-but-not-raining-(!) kind of way that I pounced on the chance to take Pearl on a long walk. We looped all around Southeast, dropped her little pink crocheted hat somewhere, stopped at Hot Lips for a slice and a boysenberry soda, retraced our steps to find the hat patiently waiting on the sidewalk for us, met Rachel at Little T for a coffee, and headed back home for naptime. So while Pearl slept I realized I was hungry again, and I had just enough energy left to make myself some soup.

I love soup but it’s hard to find just the right one, if I don’t make it myself… mostly because I don’t eat meat and I’m allergic to potatoes (good times, let me tell you!) so that rules out everything on the grocery store shelves but the occasional can of vegetarian chili. So I made this one up. 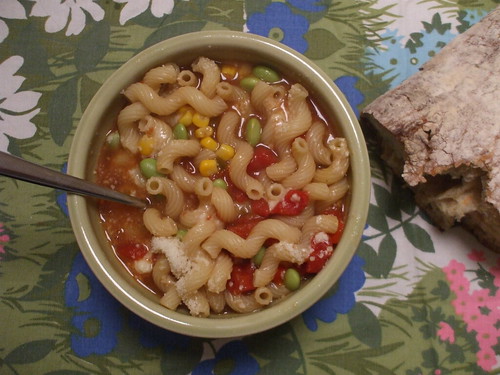 I’m not much of a food photographer and it was about midnight-black outside by the time I took this, so sorry, it’s not very artful. I also got some seven-grain carrot bread at Little T (hanging out next to the bowl) and oh my god, that stuff is good. I started by neatly sawing off a piece, polished that off, and grabbed the next hunk of it without a whole lot of ceremony. Hopefully there will still be some left when Andrew gets home. Maybe.

Anyway, along the lines of the slack point-and-shoot food photography, here’s my recipe for lazy soup. Pretty much everything I used came from Trader Joe’s, but you can substitute what you have in the cupboard.

Bring one container of vegetable broth to a medium boil and add about a third of a package of celentani pasta. After a couple more minutes, add any vegetables (I used half a package of frozen soycutash, though I have been known to chop and include actual fresh vegetables when I have more in the tank), and after a couple more minutes, add one can of diced tomatoes and a splash of olive oil. Simmer until the pasta is just the way you like it and everything else will hopefully have caught up too. Serve in a big bowl with parmesan and carrot bread.

election postcards, take 2 an octopus for your Monday afternoon