So, I pretty much stick to writing about positive stuff here — basically, things I like (with the exception of discriminatory constitutional amendments) and projects to make. But today I have a request to make, if anyone in Portland can possibly help. It’s just a little thing, I guess, but it’s gotten under my skin. 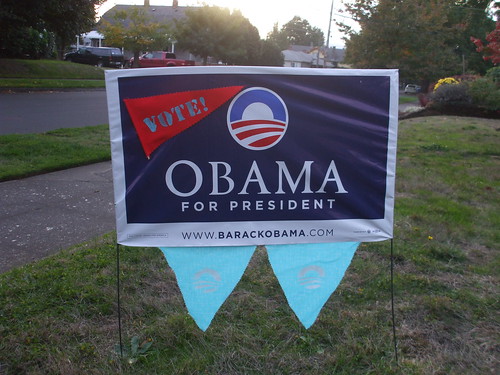 This week someone took my Obama yard sign out of our front yard. It’s just a standard one, but I bought it at the Division St. headquarters when I was volunteering there, and decorated it with pennants that I hand-printed with Lise and Sarah while we were registering people to vote, and it means a lot to me — it represented my hope. I loved seeing other people’s signs when we were out and about, and this is the first time we’ve ever had our own yard to put our own sign in, which was exciting in itself. I wanted to keep it for Pearl, to show her what we were doing and what was happening when she was a tiny baby, and most of all that what we hoped for all these months actually came true. It made it through rain, wind, Halloween, and election night, and now someone has swiped it to be their own souvenir, or ruin it, or sell it, or whatever.

We’ve already bought another one on eBay (there are 30,000 Obama items up right now, if you can believe that, from the kajillion people selling New York Timeses and buttons and signs and every other thing that ever stood still long enough to be Obama-d) and once it comes, I guess I can re-print the pennants and keep it safely inside. But it doesn’t feel the same, and I’d like to at least make a try at tracking it down.

So I put up a craigslist posting offering a $25 reward, no questions asked, and I thought I’d mention it here too, just in case. Stranger things have happened, and maybe you’ll notice it out and about somewhere… and if someone does go to the trouble to return it, they are welcome to the cash and the new sign. I’d much rather have the one we decorated ourselves, and I doubt it matters as much to anyone else.

I was on the fence about what to do about my HOPE flag and pennants up on the porch, but I’m leaving them up for now. They mean a lot to me too, but I don’t want to have to hide anything I was ever excited about inside where someone can’t swipe it. And I can make more of those too, they aren’t valuable to anyone but me.

So, I have ordered more gocco inks and I’ll be reprinting my election postcards as soon as the supplies get here… along with some encore pennants, it looks like.