Home / chatty / our trip to the state fair

I’ve lived in Oregon for eleven years and somehow never made it to the state fair until this year — which is so weird when I stop and think about it, because when I lived in North Carolina I hardly ever missed it. But you know how you never get around to doing all the cool stuff you’d like to until you have just the right people visiting? This time I had a seven-year-old to hang out with, and after a warm-up of pizza, Monopoly, Olympics-watching, ice-cream-making, OMSI, a trip to Multnomah Falls, meeting Ramona Quimby, a visit to the soaking pool at the Kennedy School, painting, and playing with the new cousin and every one of her stuffed animals, the trip to the fair was definitely ON. 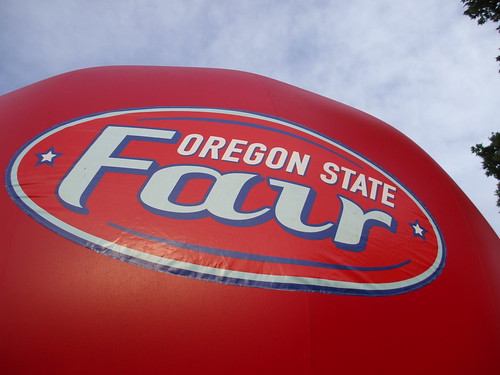 We got there and checked out the cows, sheep and pigs on the way in, and then immediately headed to the OMSI tent to enjoy some science puzzlers, and across the way, some reptiles. After that excitement, some of us were hungry and so our next hour was devoted to eating a ton of awesome food: an extra-large RC Cola, fish tacos, deep-fried zucchini sticks, sausage sandwiches, Hawaiian noodles, a fishburger, and a Mt. St. Helens mountain’s worth of curly fries: 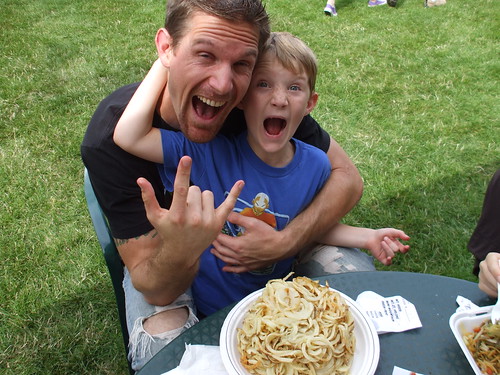 For dessert, there was a chocolate-banana crepe and a deep-fried Snickers. My pick was chocolate-dipped cheesecake on a stick, rolled in almonds for an extra 50¢. I’d make the drive back to Salem just for another piece of it… and some more fried zucchini too, now that I’m thinking about it.

Then we headed to the midway for whack-a-mole and a giant photo souvenir button for Grandmama.

And then we parted ways so some people could go on rides, and other people, who had a baby in a carrier, could look at prize-winning Legos, vegetables, and crafts in the blissfully cool air-conditioned hall. I loved this afghan designed to look like a patchwork quilt (with ties, even!) — it won third prize, but I would have given it a first for sure. 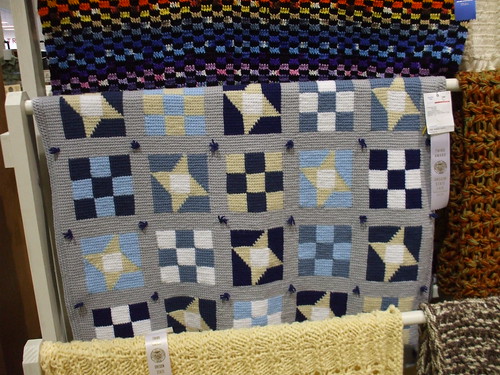 There were dozens and dozens of gorgeous quilts there, but I think this one (the pinwheels in the middle) was my favorite. 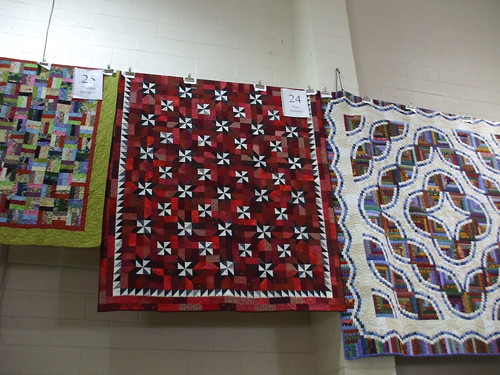 And we saw the official Oregon Sesquicentennial blanket from Pendleton, unveiled on Friday at the fair — Mt. Hood reflected in the lake, framed by trilliums and ferns. 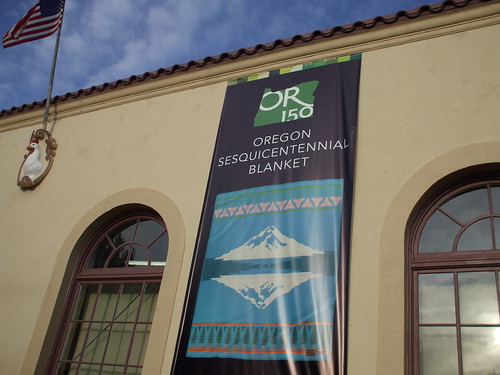 This second photo is from the back, showing the reverse with white instead of blue as the surrounding color. Oh, it is so beautiful in person, and I want one so badly. And I found out when we got home that Andrew’s friend Patty Fogarty designed it, which is so cool! 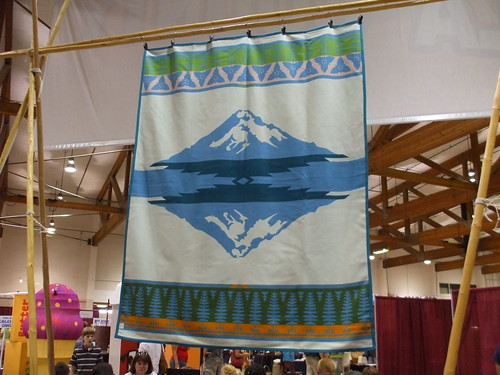 We met up again, and back at the midway, I got an airbrushed baseball cap that I absolutely love — I think other people were a bit skeptical until they saw the magnificent finished product. Julian rock-climbed while Pearl took a nap in the shade.

Then there was an encore trip to the Legos competition, lots more walking around, kettle corn, and for a finale, 25¢ foot massages. Best quarter I ever spent, hands down. 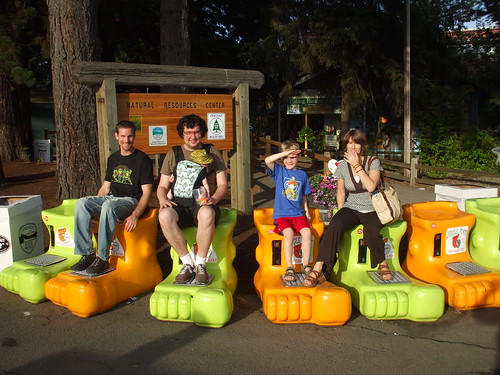 The fair is running for another week, and if you haven’t gone yet, don’t wait eleven years like I did — just go! If you need more convincing, be sure to check out Alicia’s luminous photographs from her visit. Just before Julian left last night, we asked what he liked best about his trip to Portland, and he immediately said the fair. If anyone asks me, I’ll say the same thing.