I made this simple coin quilt (actually a reversible duvet cover) for my mom’s 60th birthday in April. I sewed the whole thing in a week in LA, right before we moved back to Portland, so it was kind of a whirlwind — and then I flew with it hidden in an extra suitcase in time for her surprise birthday party in North Carolina. On her actual birthday morning, I sneaked it into her room and made up the bed with it while she was downstairs… and then when she walked in, there it was! 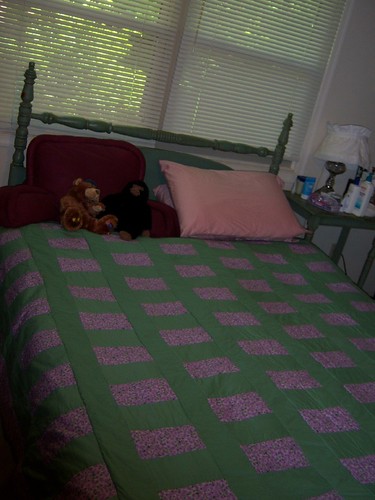 Anyway, in all the busy-ness I never actually got a photo of it, if you can believe that. So this week I was pleased to get a few pictures from our friend Pam — and here they are.

I based the design on Hillary Lang‘s gorgeous blog birthday coin quilt, which I absolutely love. I cut 99 “coins” (4 by 7-inch rectangles) in each of two cotton fabrics: a pale green and lavender floral. I joined them into long strips of 22, alternating between solid and print, and then joined those with 4-inch wide strips in the same solid green fabric. Like Hillary’s design, I offset the coins so they alternate between solid and print side to side. 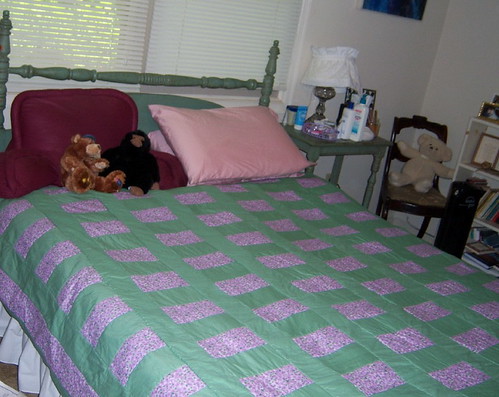 Then I added 4-inch panels of the two fabrics on each side to widen it to a more substantial queen size. I stitched in the ditch all around the coins and down the panels (breaking many needles in the process… this stage was not super fun). I made the reverse side out of two pieces of the same floral fabric and left an opening at the bottom to slip the comforter in, and then added two sets of green ribbons to tie it closed. Here is Honey making herself at home, though she’s usually not allowed on the bed! 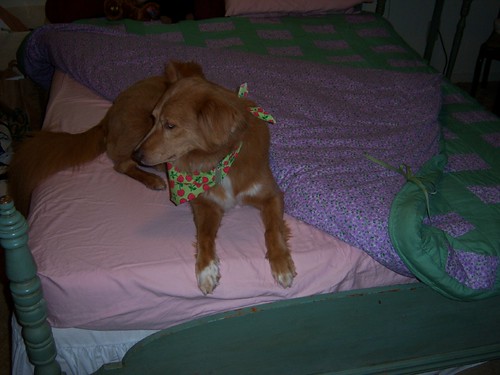 I’m happy with how it came out, though I made a lot of amateur mistakes. I was at least 3/4 of the way through it before I had ever even heard of a walking foot — I quilted the whole thing with my regular presser foot and broke a lot of needles trying to keep the three-layer sandwich nice and even and my seams nice and straight, all the while wondering why I was so incredibly bad at this. The layout and quilting took over my entire living room and all my waking hours, and it was a race against the clock to finish it before my cab arrived to take me to the airport (though I did get it all done except the hand-sewing the ribbons part, which I did at leisure after the big presentation).

Next up is a quilt for my brother’s 30th, which we celebrated while I was in New York last week! I gave him a card with a heartfelt IOU (I have learned my lesson about flight-deadline quilting to say the least!) and he gave me some colors and pattern ideas. I recently got a new sewing machine with some special pro-quilting features that stitches like a dream (yay!) so that is definitely going to cut down on the disasters, I hope. And here’s what I’m about to start cutting, after a fun trip to Purl Patchwork for some Katie Jump Rope: 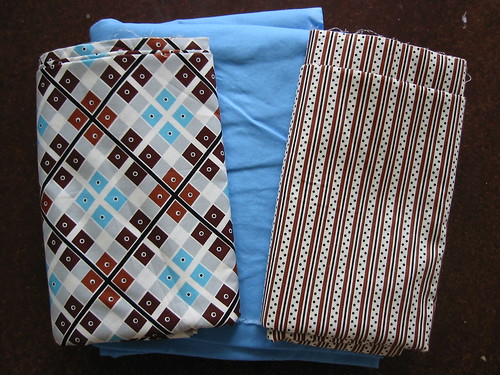 Speaking of birthdays — Andrew’s is today! We’re going up to Mt. Hood for four days — we rented a cabin for our mini-summer vacation getaway. It’s right on the river and it has hiking trails, a hot tub, a grill, and a nice big porch for relaxing… but the it doesn’t have wireless internet, a blessing in disguise maybe? I’ll see you on Monday after we get back!

Oregon, I love it* Renegade redux