First, on a happy/crafty note, I got to write something really fun for the Adorn blog yesterday, about Amy Karol‘s Mailorder and Tie One On projects. So here it is if you’d like to read it.

But today I feel that I need to write something political here, which I only do occasionally, and I hope it doesn’t alienate those who feel differently than I do. To fit it more neatly into my usual content and context, I’ll just say that I think music and film are ultimately very crafty, and that this is a review of sorts. 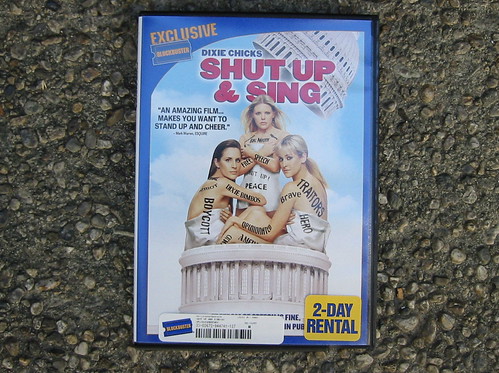 I watched the Dixie Chicks documentary “Shut Up & Sing” yesterday, which I thought was incredible — a compelling, all-access look at Natalie Maines’ comments on President Bush and the war in Iraq in 2003, and their aftermath. I can’t recommend it enough, no matter what your feelings on the decision to go to war may have been at the time, or are now. The right to free speech is so important and this film captures that struggle — when is it not worth it anymore? When your career is essentially ruined, when no radio station will play your songs? When you’re getting explicit death threats? Can you still stand by what you said in passing on stage during a concert, if it’s your personal belief? How strong are your convictions?

I was so impressed by the courage and strength these three women showed in the face of criticism, ridicule, and hatred after revealing that they didn’t support the war in those early days, from their tour arenas to their picket lines. The Senate hearing on why their music was systematically banned from every “Cumulus” radio station in the corporate chain was so riveting; I respected Gordon Smith (R-OR) even less than usual, and Barbara Boxer (D-CA) as much as ever.

I don’t get political very often over here, but today after reading the LA Times headlines (dozens of senseless deaths after a suicide bombing in an Iraqi book market, fear for his family propelling an Iraqi to a new life as an illegal immigrant in Europe, shamefully poor care for our war veterans at Walter Reed Hospital) I just felt drawn to write about these things — the film, yes, but the larger worldview too, unquestionably.

The fourth anniversary of the war is coming up (March 19th, to be exact) and I want to do something, to say something, to show that I think it is wrong. If there is anything going on in Los Angeles, I would love to know about it and participate. If there is anything creative you’re doing to protest, wherever you are, I would be honored to hear about that too. I so appreciated the support that people gave me in January when I organized my small fundraiser for United for Peace and Justice, and I would like to return the favor by giving my time and energy to something progressive and productive now.

Thank you for reading — it will be back to crafts tomorrow, I promise.

p.s. for a postscript to the documentary, check out the Dixie Chicks’ (five!) Grammy triumphs over on YouTube… love their live performance especially.