When Andrew and I performed our show at the Noorderzon Festival in Holland last month, I got to steal a precious hour before a couple of our own nightly performances and rush to a few other shows. I really enjoyed two in particular: New York artist Sara Juli’s The Money Conversation and the latest piece from Stan’s Cafe, a group based in Birmingham, UK: Of All the People in All the World. Now it’s touring to the Skirball Cultural Center in Los Angeles for the next five days, en route to Australia. If you can make it over before it closes Sunday afternoon, I wholeheartedly recommend seeing it — if possible, with a little cushion of time for wandering around and thinking about it. Or a big cushion would be even better.

Today’s L.A. Times has a great preview (with the requisite cornball headline) that explains the concept much more thoroughly than I have time or room for. And the Stan’s Cafe site is well worth a visit, too. All I can say is that of the art shows I’ve seen this year, visual or performance-based, none of them have resonated with me — or stayed in my head — like this one did.

Using a simple, universal template — that one grain of white rice represents a single human being — the group of performers, wearing lab coats and hovering over intricate scales, bring all sorts of dry and dusty statistics to life. They update their installation throughout its run, including all kinds of up-to-the-minute, site-specific information gleaned from a laptop and a wireless connection: last month, they vividly illustrated everything from the number of civilian casualties in Lebanon and in Israel to the number of millionaires (and billionaires) in the world in piles of rice. Two immense stacks placed next to one another represented the duality of the number of people who will be born today in the world, and those whose lives will end. It was somehow encouraging to see that the first pile was noticably larger, just as it was dark and heart-wrenching to look at the sad scattered heap illustrating exactly how many people died in the desert trying to cross the border from Mexico into the U.S. last year.

We didn’t bring back many souvenirs from Holland — a little something for our nephew, and a vintage shirt and dress from our favorite places in Amsterdam — but I did buy a one-euro memento of the fascinating Stan’s Cafe show, a vacuum-sealed packet with four grains of rice inside. And when I went to the show here in Los Angeles this week, I got a companion piece: 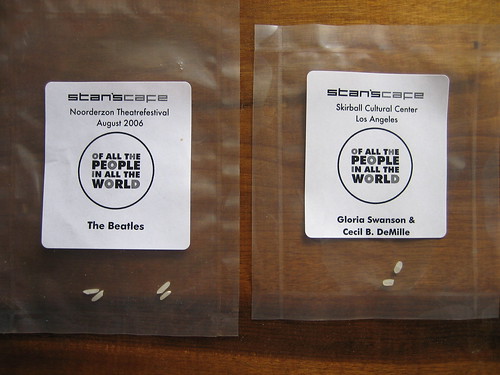 If you’re not in Southern California, you can still contribute to the Statistics Center on their site, suggesting new statistics to include — or just see what other people have submitted, like the Dodgers’ single-season attendance record (3,608,881 in 1982), or the number of children who die of hunger every year (an astonishing 12 million).

Of All the People in All the World
Skirball Cultural Center, 2701 N. Sepulveda Blvd., Los Angeles
Noon to 5 p.m. Tuesday, Wednesday, Friday and Saturday
Noon to 9 p.m. Thursday
11 a.m. to 3 p.m. Sunday

Feel like a woman, wear a dress! Craft Lab!