New Embroidery: Not Your Grandma’s Doily, a show of unconventional and modern feminist needlework, opens at Contemporary Crafts Museum in Portland, Oregon on September 22. Twenty-one artists will exhibit their work, and one community-created piece will be spotlighted in the North Window: Stitch-O-Rama, a vintage tablecloth that’s made the rounds at crafty events all summer long, giving dozens of Portlanders a chance to embroider and embellish it with their own designs. I got a chance to talk to Namita Gupta Wiggers, one of the curators of the show, Jenny Hart, one of the featured artists, and Jen Neitzel of DIY Lounge, who’s teaching embroidery and handcraft workshops all fall to celebrate the exhibit. 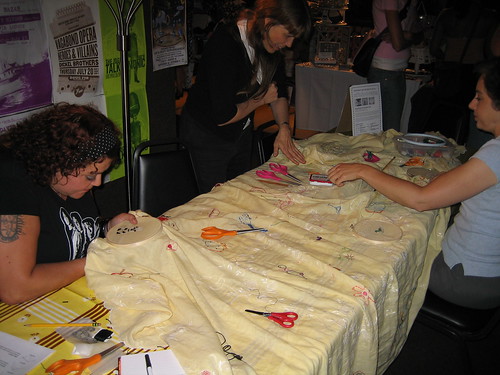 the tablecloth at Crafty Wonderland in July

Tell me about the tablecloth and its journey around the city!

Jen Neitzel: DIY Lounge and many other organizations like Crafty Wonderland, Church of Craft and PNCA have all hosted an embroidery session, where people from the community were invited to embroider on a tablecloth, which moved around town to various locations. 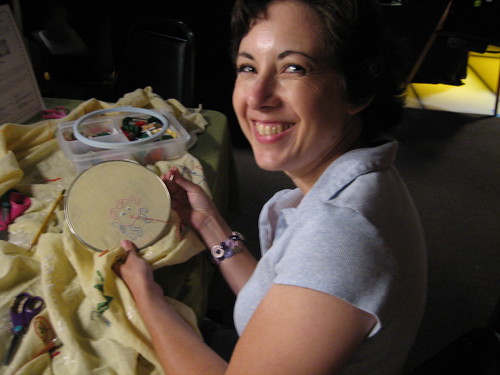 Diane Gilleland of Church of Craft embroidering a sugar bowl 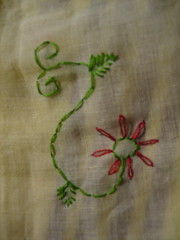 Namita Gupta Wiggers: Some marvelous things happened along the way. Unfinished pieces in one session became transformed in others – such as a half-embroidered lobster that was put into a pot by another stitcher. 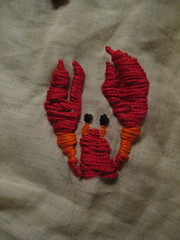 the lobster (before stitcher #2’s contribution)

At Art in the Pearl, we had an entire table full of elementary-school boys stitching on the tablecloth. At other places, the cloth had people from a range of generations and experiences working, creating the kind of exchange of ideas and experience we hoped would happen.

I also took the tablecloth camping with my family. We spend a week each year camping with 70-plus families who have all adopted through Holt International. During this year’s campout, I set up the tablecloth and people spent several hours each day stitching on the cloth. The conversations that arose were fantastic, and so many teenage boys and girls stopped to try their hand at embroidering.

Importantly, we asked our needleworkers to sign a book that will be on view in the museum. Recognizing all participants who chose to sign the book was a critical element of the work, as some feminist works from past decades do not acknowledge those who helped create the finished piece.

New Embroidery: Not Your Grandma’s Doily 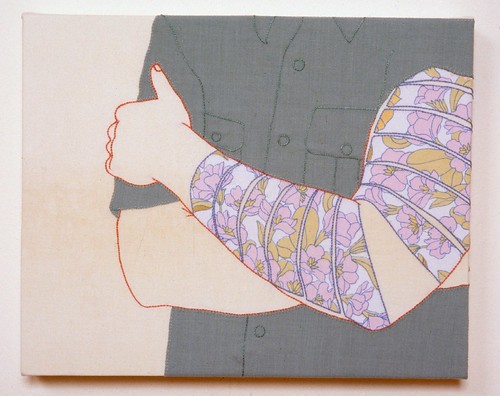 How did the idea to create an embroidery show that references feminism and the new domesticity come about?

Namita: Manya Shapiro and Annin Barrett started the project just over two years ago after noticing an increase in the use of vintage and found linens in artwork shown in galleries. The imagery used by these younger artists is humorous, ironic – even subversive.

Associations with feminism are inevitable given that the materials being used are domestic textiles. But the fascinating thing about this exhibition, however, is how few of the artists feel engaged by feminism. In interviews, many acknowledged that the struggles of feminism and of women who were limited in means of visual expression in past decades is important, but the links to this past are not necessarily what is driving the concept behind the work. It is clear that artists working today are in a different place–professionally as artists, and culturally as women. This exhibition brings it out through a handcraft that links the past and present, art and craft.

The artists see feminism as something that opened doors, but the use of embroidery as a media is driven more by how it executes their concepts and ideas than a political statement in using these materials or this media. 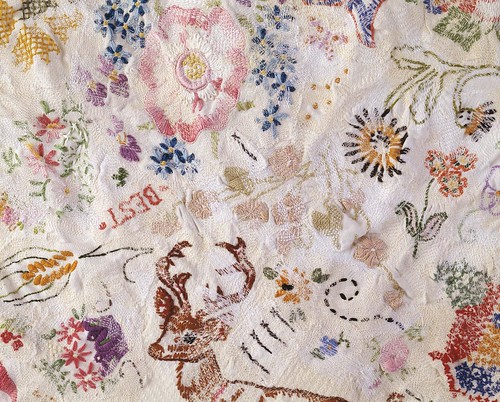 What do you find exciting about this genre of modern craft?

Namita: This is a way for us to tell the story of how utilitarian textiles are being redefined through the hands of artists today. It shows a shift in imagery. The most recent work has a good deal of figurative imagery– but the figures are composed with heavy outlines that come more from appropriated styles and imagery from comics, scientific manuals and book illustrations than from “high art.”

Another critical angle to consider is the way in which utilitarian objects change meaning and value over time. Some artists specifically choose objects that are laden with nostalgia – family heirlooms, for example. These materials are handled quite differently than those found in thrift stores or the artists’ own closets, which are fragments or leftovers that have little to no value for use, but can be used as materials for art making. 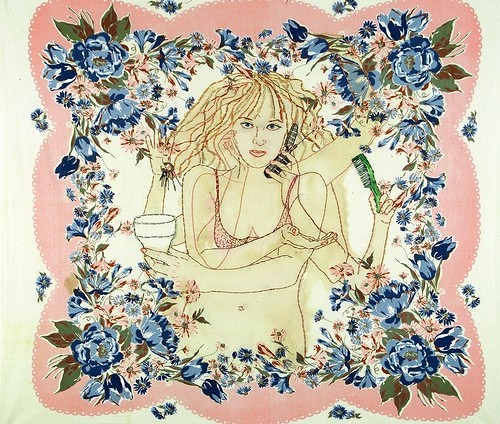 The objects that are the “raw” materials in this exhibition were once embellished by anonymous women who used the materials to convey a particular self-image. Today, artists are using the same embroidered materials to convey a very different self-image, where humor prevails, women sport urban accessories, or the experiences of being a young boy are explored through the same medium.

How does embroidery link traditional handcraft to modern feminism and the new domesticity? Can you describe your piece specifically??

Jenny Hart: I think traditional handcrafts are being linked to modern feminism because feminist movement of the 60’s had to necessarily distance itself from those types of activities, which, creative as they may be, were viewed as domestic activities. Our generation (third-wave feminists) found itself in a place where these activities have now been absent for so long, we can re-embrace them and celebrate them. 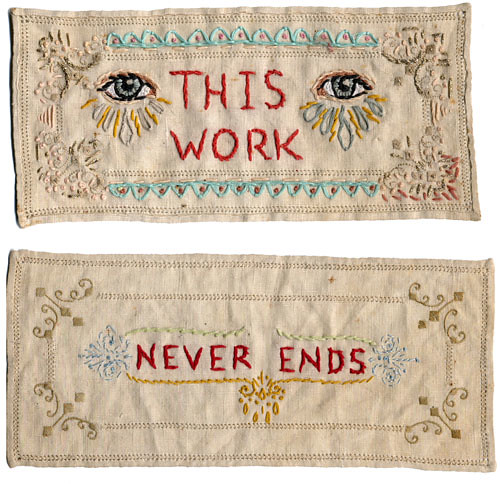 My piece (“This Work Never Ends”) was never really meant for exhibition. I made it for myself and it hung on the back of the armchair that I sit in when embroidering. It was a little piece about how I felt about the stresses of my life, and also the enduring quality of embroidery. That it will go on forever, and so will my desire to create it.

What is DIY Lounge doing in conjunction with the show?

Jen Neitzel: DIY Lounge is collaborating with CCMG by offering embroidery lessons as part of the larger installation. Heidi Steeves and I will be teaching embroidery on vintage napkins and fabric scraps as a means to make the art exhibit interactive and involve the community. More information on workshops is here.

Susan Beal loves embroidery and the Contemporary Crafts Museum–she married Andrew Dickson there in the Church of Craft last year! Here is the little cupcake she contributed to the Stitch-O-Rama tablecloth (at lightning speed, while vending at Crafty Wonderland): 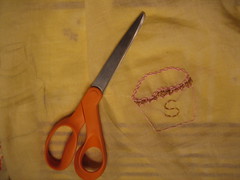