a rainbow of fabrics

Yesterday morning, my sewing room was a total disaster – messy, cluttered, and overwhelming. Then, a sleep-deprivation-fueled crafty miracle happened! 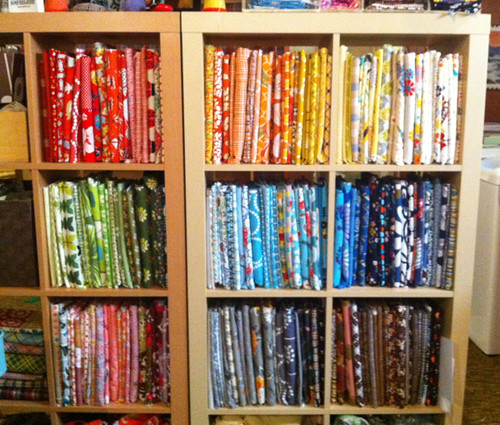 Everett woke up at 4:00 on the dot yesterday morning desperate to play in his new playroom (more on that later if anyone is interested, I re-did that whole room on Monday after a trip to Ikea, and apparently made it a little too awesome). I tried everything to get him back to sleep, but finally conceded defeat, made coffee and headed down to the basement with him. Five hours and three cups of coffee later, I had totally cleared everything out and started over from scratch! The rest of the day was spent re-organizing and working on all the big and little things. I LOVE how it all came together! I finished folding all the rest of my fabrics (using this awesome tutorial) that are a half-yard or bigger this morning, and here they all are taking up 9 Expedit shelves. I’ve wanted to pull this off for years. I’m maybe a couple days away from 360-degree “after” photos but this one makes me so happy!!

PS – Thanks for the lovely comments for the clothespin dolls giveaway! I have been reading them all to Pearl and she will pick a winner this weekend, while we try one of the awesome projects you all suggested!

sewing for all seasons our summer teepee adventures