I always like to make a little photo collage of all my favorite stuff I made in last year during the first week of January. (Here are my 2007, 2008, and 2009 collages + posts if you want to see those too.) This time around, it looks like everything I made fits right into a few categories… quilting, sewing, cooking, and Christmas. Except for the felt-heart valentines for Pearl’s preschool buddies, I didn’t get to do much in the way of paper crafts, and sadly no Gocco printing at all. But I did make some things I like a lot – an Easter dress and an Easter bunny for Pearl, a couple of playroom essentials, some really good jam, and a Christmas stocking and baby quilt for Everett. 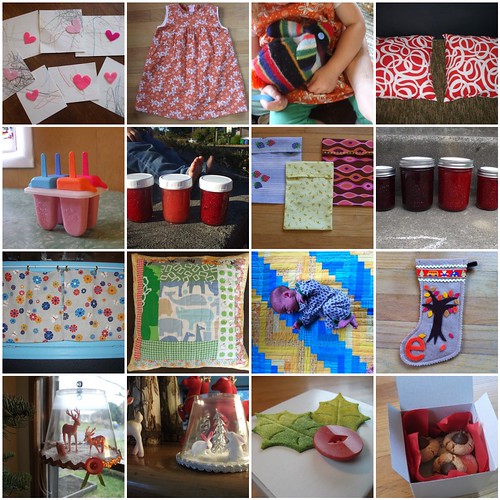 I made a few crafty resolutions for the new year this week, too. One is to keep a craft project basket happily filled and emptied, by actually making time to work on my favorite current projects and keeping them neatly in one place instead of scattered (more on that shortly). I’ve already mended a few things this week that have been sitting around the house through most of 2010, which felt good. And a couple of fun projects are right there waiting for me the next time the stars align to craft.

Another one is for cooking: I want to make a new recipe every week, and do my best to plan dinners in advance instead of trying to figure it out at 6:30 the night of, which has kind of been the way lately. So to start the first week of the new year, I wrote up all five dinners I wanted to make (or, in the case of Friday, order) on the adorable whale chalkboard Kayte gave us a couple of years ago (found at The Curiosity Shoppe). 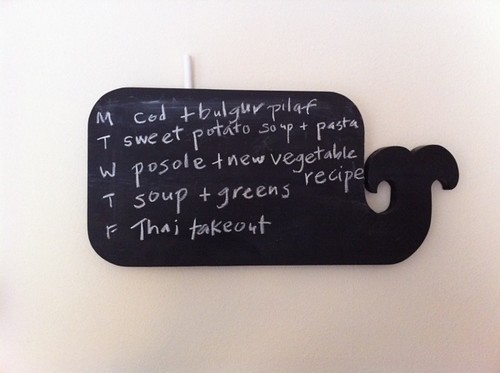 So far (as of Thursday) we are 4 for 4 and it’s really nice to just shop for the right things, make the food we decided on and look forward to eating it, instead of hunting through cabinets and freezer to see what we have when I’m already starting to get hungry. The highlights were panko-breaded cod loosely based on the recipe in How To Cook Everything, vegetarian posole from The Adaptable Feast, and my new recipe of the week. I was thinking of trying new cookbook recipes (I got the Sunset Cookbook for Christmas and it is awesome) but for this first time around, I freewheeled and made up a lemon-spinach orzo that was so good we had it two nights in a row – it’s definitely earned a page in our family cookbook. Here is how I made it if you’re looking for something new to try, too.

Saute the shallot in a generous amount of olive oil over medium heat (I used both oil and butter melted together) until it’s soft and starting to become translucent. Add the whole bag of spinach and cook until it’s wilting, adding lemon juice to taste as the spinach cooks down. Stir in the cooked orzo and warm it through, mixing the spinach and shallot with the pasta, and adding a little more oil if needed to keep it from sticking. Season it with salt and pepper to taste and serve hot with Parmesan.

Happy new year! I just want to finish one thing from the craft project basket and then I’ll be back with some pictures of that.