I’ve been thinking about making Pearl a playroom for months, but now that October has rolled in and the nice days are officially numbered, the time is now. Andrew and I spent chunks of the last few weeks clearing things out of a particularly ugly part of our basement, the charmless water heater corner. 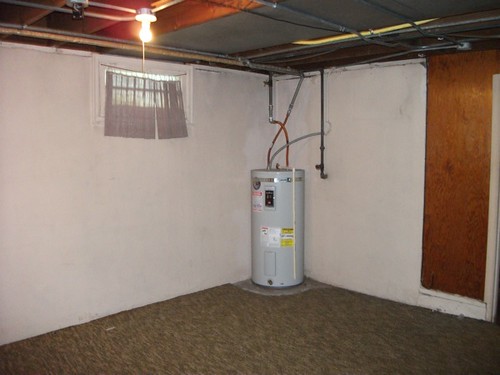 We used to have a row of mismatched bookshelves along the wall, with random stuff accumulating in front of them, and the space was really somewhere to quickly pick out (or to be honest, spend some serious time unsuccessfully trying to find) a book and split for a nicer part of the house. In late September we moved all the shelves to our rec room, and added more for a total of seven nice tall Billy bookcases in a row – instant library, and enough space and shelves to actually organize our books. And once the shelves and random stuff was gone from this whole area, it looked so much bigger and more like somewhere Pearl could actually (eventually) hang out.

So… one round of floor-to-ceiling chalkboard paint, a coat of Benjamin Moore Pool Party (in pearl finish, naturally) for the windows, and a super carpet sweep and clean later, we had the start of a playroom! Moving her stuff in piece by piece was a snap, and even though we’re not done and October is not the time of year to take basement photos in Portland, I wanted to post some photos of something I’ve done lately… 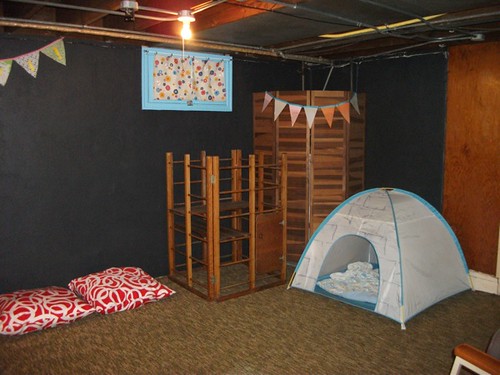 Here’s the same corner with a little play tent (a gift from Josh + Sarah), a play structure our neighbors built for their now-grown-up girls and lent us for Pearl, and a couple of big floor pillows I just sewed with an Ikea print I got a few years ago. The water heater is (thankfully) hidden with a vintage wooden folding screen I got at Lounge Lizard. The paper pennants on it were made and screenprinted by Kate Bingaman-Burt! 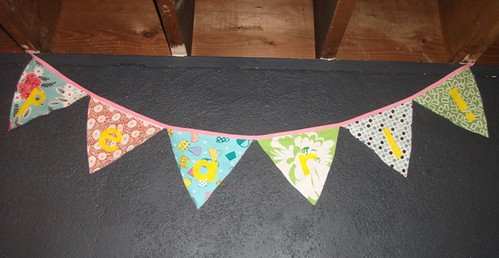 I put up the P-E-A-R-L-! birthday pennants too, 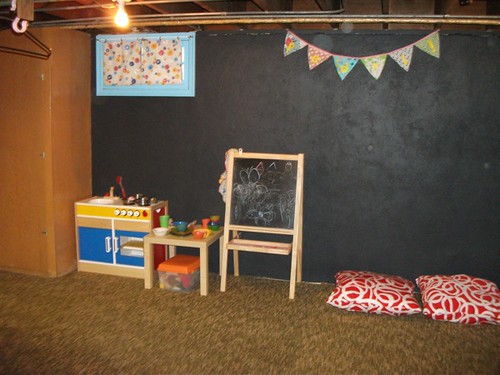 and we set up her play kitchen (with its crazy felt food stash) in the other corner. 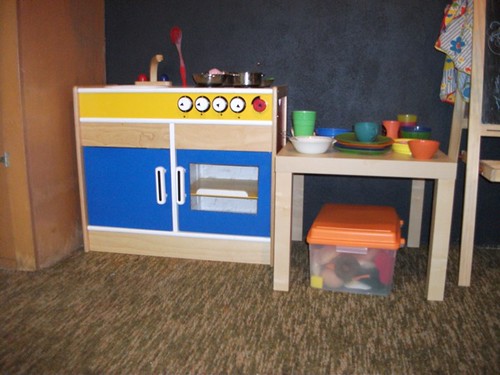 (This is the only time all that food has been that neatly contained in that storage box, ever. Pearl was still asleep when I took these photos!) 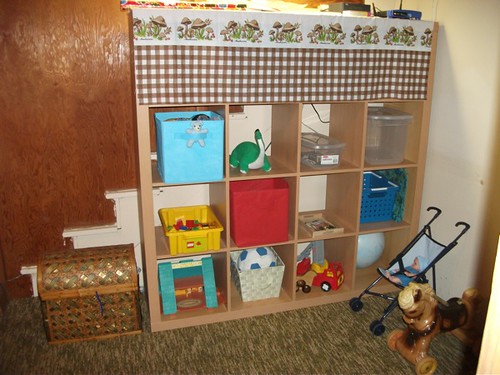 There’s an Expedit for storing all her random toys, art supplies, games, and stuff on the shorter facing wall, 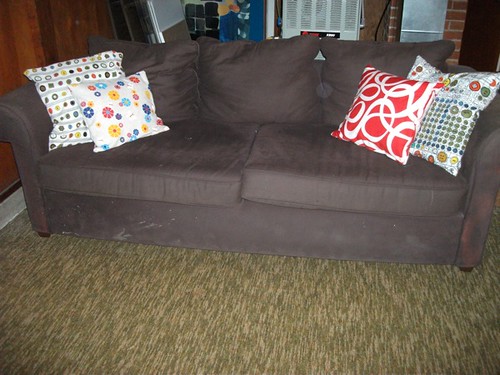 and a couch (Ektorp, continuing the relentless Ikea theme) that I sewed some new pillows for! 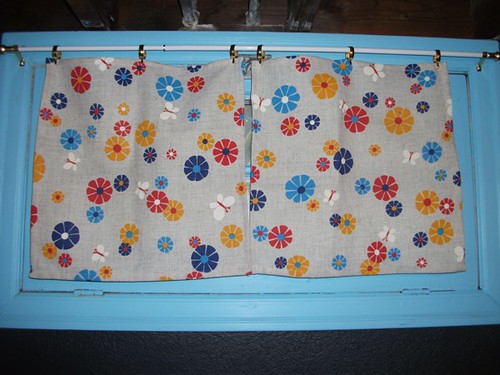 I also sewed new curtains (matching one couch pillow) using a 50¢ thrift store find from about a decade ago – a few yards of a flower-and-butterfly Japanese linen screenprint. I really love the blue windows. 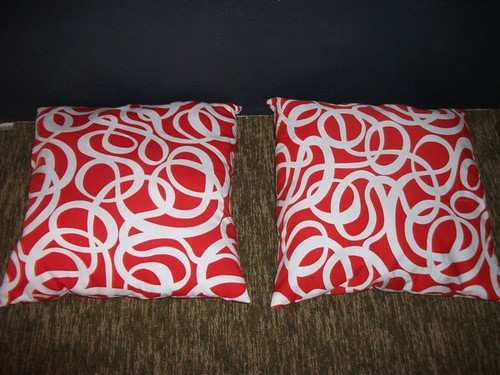 And I made some oversized floor pillows with the cheerful print I used for the other couch pillow, too.

So, we’re still rounding up the last few things — a kids table and chairs set I’m also going to paint Pool Party blue, a rug, the two hours we need to chalkboard-paint the other wall, and the chance to put up more of her artwork, but I’m so excited that we’ve gotten this far! She totally loves it and it’s so nice to see this cool little Pearl set-up instead of the same grim old basement (see first photo again if need be). 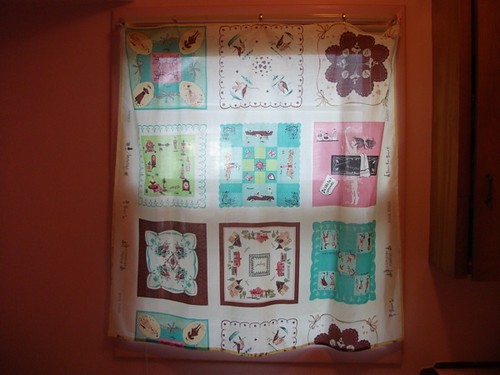 And I got to sew some things for the house – wow, that was fun after all these months of deadline-only crafting! Two sets of curtains and four pillows for here, plus another super-simple curtain for the pink princess bathroom upstairs. I can’t remember where I got this fabric, but it is a Japanese print, probably about three years old (maybe five), patterned with vintage French handkerchief designs. Love it.

Okay, I will be back with some Halloween projects and some news soon!