I had a photo-heavy post all planned out with some beading and jewelry-making projects and stuff to share, and then my childcare fell through today… so that (along with a fair amount of planned work-work) was scratched off the list and pushed until tomorrow. But now that Pearl is taking a little nap I do have time to gush about something awesome and show off a few pics of that instead!

I saw Diane for lunch on Monday which was lovely as always. And she brought me three ziploc bags of her amazing stash of vintage Lilly Pulitzer fabric… and, well, wow.

Here it all is, in stacks — with a white thread spool down in the lower left for scale. 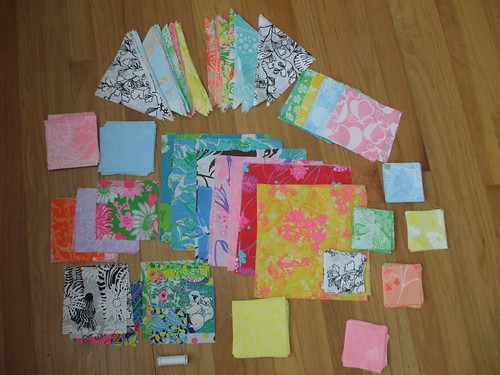 You might want to look at the large view of that one on flickr, if you are as obsessed with vintage fabric as I am, anyway. The patterns! I didn’t have time to do any close-ups yet but I’m hoping to show off a WIP using some of it soon…

I have been admiring it and arranging it and rearranging it incessantly. It was hard to pick a favorite until I spotted this square: 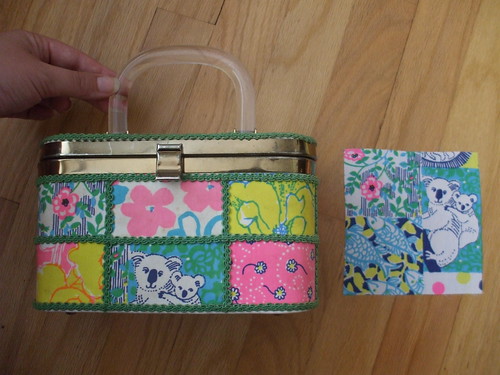 I found that handbag, which is one of my dearest treasures in this life, on eBay a few years ago. I’ve always wondered what the original prints featured on it might look like… and then I spotted my little koala bears peeking out of this piece. Awesome!

I love, love, love vintage Lilly stuff. I have at least a dozen of her dresses, six or seven a-line and wrap skirts, two crazy maxi skirts, that handbag, two yards of silky fabric I randomly found, a bikini, a scarf, the beautiful baby quilt Pam and Marie made for Pearl, two pairs of pants, and a pair of extremely loud zebra pants that are Andrew’s exact size, but that he won’t wear. Some of it is in this dusty old flickr set of Lilly randomata. I can’t believe I haven’t added any photos to it since 2006 (until today) — but I guess the whole moving back to Portland, most of my stuff in storage, maternity clothes thing put a damper on exuberant Lilly-wearing and photographing.

Anyway, that era is now over! Viva Lilly! and thank you from the bottom of my heart, Diane!!