One of my favorite artists, Susie Ghahremani of boygirlparty, is having an art opening at Giant Robot in LA tomorrow — I would so love to go, but unfortunately I’m 800 miles north of things. 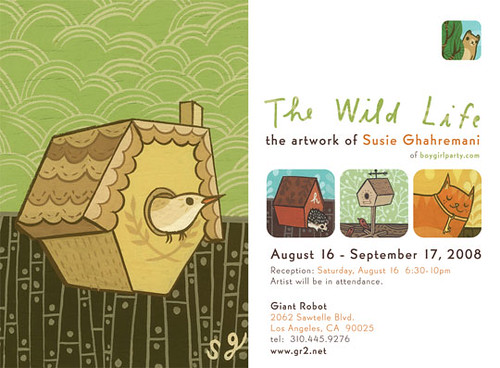 It’s time to get in touch with your “wild” side at the opening of Susie’s fifth solo show, THE WILD LIFE. The show will be at Giant Robot in Los Angeles, running August 16th – Sept 10th. The opening takes place on Saturday August 16th at 6:30 pm. THE WILD LIFE exhibit debuts over a hundred new mini paintings of animals — from owls and kitties (of course!) to hedgehogs and penguins — sleeping, eating and living indoors just like we the people do. Part of the show will include a 3-D installation so you can walk in and around Susie’s world! And then, after you’ve taken in the art, you’ll be free to express yourself in the haiku contest sponsored by Giant Robot, so don’t forget to bring your best poetic skillz.

I went to Bird Call, her lovely 2006 solo show at Giant Robot, and snapped up this fantastic record player — one of my favorite things! 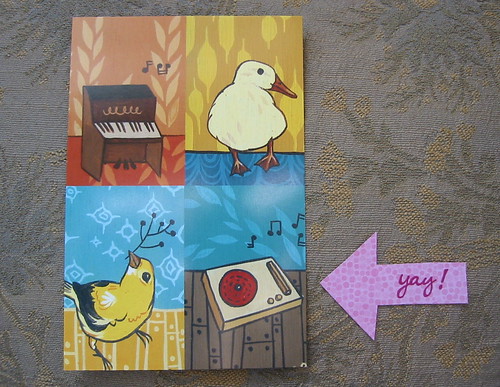 On the other side of town, Ms. Jenny Ryan has joined forces with Tootie and Billie of ReForm School for a lovely new endeavor. I can’t wait to see the class list! 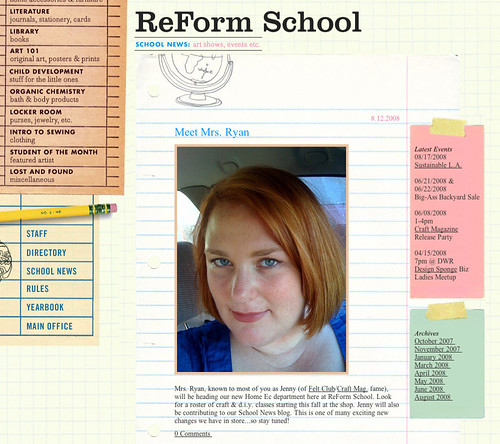 Jenny says, “The girls from ReForm School made a big announcement today… which is that starting this fall, I’ll be their new Home Ec. teacher! This means I’ll be teaching and curating a series of cozy crafty classes at the Silverlake shop, and will also be selling new craft kits, fabrics, etc. in addition to contributing to their blog. I also have a companion website debuting later this September.”

I’m really hoping to come down to LA for Felt Club in November — and speaking of, Jenny is now taking vendor applications, so hurry and get yours in by August 29!