Thanks so much for the sweet comments and emails about our new house!! We get the keys this afternoon and I’m so excited. Moving I’m not so excited about, but it’s only six blocks from our apartment so at least the whole process will be pretty streamlined…

Things have been insanely busy lately — I have a huge work project due tomorrow, all the pre-holiday and Crafty Wonderland stuff has been fun but ridiculously hectic, and the house details have just taken over every other waking moment. But yesterday morning Andrew and I decided to steal just one evening back from the craziness. So we ran over to the Rose Garden to get last-minute Blazers tickets for the game that night, and it was just the thing. 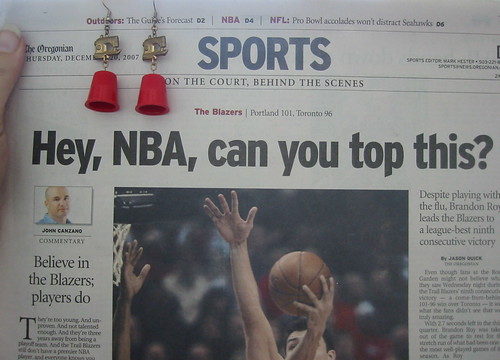 I can’t say it was a pretty game, and a lot of the second and third quarter left me wincing, but the Blazers sure turned it on at the end! Everyone was screaming and cheering and it was so much fun. Nine wins in a row! I wore my lucky charm: my gorgeous Charcoal Designs sewing machine-and-thimble earrings. Every time I wear them to a game, the Blazers win! I think it must be the red that does it.

What can I say, I moved to Portland in 1997 and fell for the Blazers immediately. I never cared about the NBA before, I was a college basketball fan through and through, but it was so fun to go to home games (you could get $10 tickets!) and hang out with a big group of people to watch the rare TV game. But I think the turning point for me was the disastrous three-way trade that exiled Brian Grant and stuck us with spendy, under-achieving Shawn Kemp, closely followed by the Blazers snapping up a sex offender just as the Sonics dropped him in disgust. Suddenly the team was pretty much all guys you wouldn’t want to run into in a dark alley: several relentless animal abusers, the aforementioned wife-assaulter/babysitter-rapist, a millionaire deadbeat dad/coke addict, and a handful of habitual DUI-getters. I stopped watching and stopped pulling for them and just gave up on them for a couple of years. Never mind that they couldn’t get close to .500, I would have stuck with that, but they were a bunch of thugs.

Then this year we finally dumped the last of the Jail Blazers and got some guys who are actually nice, fly their parents and grandparents to Portland for Christmas, take the whole team out to dinner when they win Western Conference Player of the Week, and who are just so much fun to watch! And I am back on the Trail Blazer bandwagon. Oden in ’08 is definitely worth the wait!

If you’re a fan too, don’t miss Blazer’s Edge, a daily blog with super engaging, intelligent posts and comments, and as insightful a take on sports as I’ve ever read anywhere. I just found it this month and I’m reading it every day now.

The next home game is Friday, and then there’s a fun one on Christmas day — the Blazers (in red) will host the Sonics (in green!). I wish we could go but we’ll be up at Mt. Hood (yay!) and watching it on TV! There are still tickets though, if you want to grab a couple!

Speaking of tickets, I have to add one last plug: Andrew is downright evangelical about the Entertainment Book and the many, many deals and discounts within, our copy sees serious action. And in the 2008 Portland version, page G1 offers 3 coupons for buy-one-get-one-free Blazers tickets! We got half-off $49 seats [section 301, row B, seats 20 + 21] for last night’s game, by far the best view I’ve ever gotten there, and used another coupon for dinner at Chino Saigon just up the street. So awesome.