I’ve been craving my grandmother’s pound cake for the last few days, but I’ve had no luck finding anything like it anywhere here — so today I went through all of her recipes that my mom gave me for my birthday and halved the pound cake recipe to make a batch of cupcakes. They turned out really nice, I love the crisp, buttery brown crust especially. 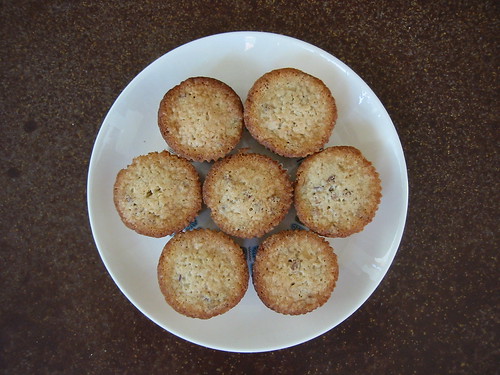 The traditional 1800s version calls for a pound of sugar, a pound of butter, a pound of eggs, and a pound of flour, which would make an incredibly decadent, luscious cake — but my MeeMee’s recipe is still plenty rich with a fraction of those quantities. I added chopped cherries and pecans to the “plain” batter since I had them in the house, but one thing I will do next time is cut down on the sugar a bit — it’s nice and sweet without the full amount.

This half-version makes 16 cupcakes; if you’re doubling it for a full cake, use a buttered and floured bundt pan and bake for 1 hour 20 minutes, checking on it after the first hour.

1. Cream the butter, oil and sugar together and add the eggs. Now alternate adding the flour + baking powder and milk + almond/vanilla mixtures, stirring well, until it’s thoroughly mixed.
2. Stir in the cherries and pecans. Fill cupcake papers about 2/3 full and place the pans into a preheated 325-degree oven.
3. Bake for 30 minutes, checking for doneness at 25 minutes. I turned the oven off and left mine in for a few extra minutes to brown.