Home / art and craft / Sell Out premiere this weekend

I’m very excited to announce that my husband Andrew and I will be premiering our new show, Sell Out, at the PICA TBA Festival this weekend! As with the AC Dickson: eBay PowerSeller show, he will be performing and I will be running the PowerPoint side of things. 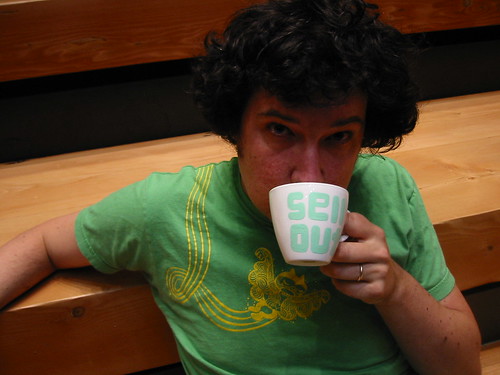 If you are in Portland, I hope you can make one of the performances: Sept. 8, 9, 13, and 14, at 6:30 pm each night. The festival is just amazing and I can’t wait to see some of the other work on our nights off; we have the Nature Theater of Oklahoma, Claude Wampler, and Reggie Watts shows circled on our calendar.

This year’s festival honors Sekou Sundiata, a remarkable poet, artist and musician who performed at TBA: 04 — his solo show, Blessing the Boats, was incredible. Three years later I am still thinking about it and marveling at his talent. He passed away in July and festival director Mark Russell, a friend and enthusiast, has chosen to dedicate TBA: 07 to him and his work.

Chas Bowie of the Portland Mercury:

Sell Out
Most Portlanders need little introduction to Andrew Dickson, whom I’ve frequently called the funniest man in town. A local staple (excepting a short jaunt to Los Angeles), Dickson has seen his stock rise tremendously over the past decade. A DIYer in the truest sense, Dickson previously garnered a diehard following with a series of hilarious character-driven mockumentaries. But Dickson really started to hit it big at TBA:04 with his autobiographical performance AC Dickson: eBay Powerseller, in which he extolled the virtues of online auctions, which provided him enough income to remain a not-so-starving artist, free of a day job. The performance was a hit; after success on the festival circuit, Dickson moved to LA, but was lured back to Portland by, among other things, a posh job at the monolithic ad agency Wieden + Kennedy. Suddenly our scruffy local artist was playing the corporate game, writing ads for Fortune 500 companies. And how does Dickson feel about that? Just fine! In fact, he’s prepared an unapologetic performance about the redemptive power of selling out, including tips on when and how to do it. Sure to be both thought provoking and hilarious, this is one of TBA’s definite “don’t miss” performances.

Grant Butler of the Oregonian:

Andrew Dickson’s Sell Out
In 2004, Dickson’s hilarious PowerPoint presentation “AC Dickson: eBay PowerSeller” was a big hit, skewering US commercialism and our online obsessions. After a stint in Los Angeles, Dickson returns to Portland with another PowerPoint monologue, this time about his transition from being an independent filmmaker to an advertising copywriter. No doubt it will be sly, and since it’s being performed in an epicenter of the advertising world — the Wieden+Kennedy agency — there might be a delicious “biting the hand that feeds you” irony.

And Andrew recently appeared on OPB’s “Live Wire” vaudeville radio show, which you can hear as a podcast here (August 25 show). He goes on at the 22:30 mark and performs an insert from Sell Out and does a mini-interview about the festival and the show.