What can I say about my intense love for ACC basketball? I don’t think I ever had much choice in the matter; when I was three months old, in April 1974, my parents decked me out in a tiny red-and-white Wolfpack snowsuit and kept me up for the whole NCAA championship game, waving my arms around to celebrate every time NC State scored. They let me stay up until Norm Sloan’s Wolfpack had won it all. When I was eight, in 1982, Dean Smith and UNC triumphed in the championship game, which was cool — I liked them okay at the time, but I was an ardent Wolfpack fan at heart, as was my entire school (especially since Fred Olds Elementary is just three blocks from NC State).

At age nine, my whole fourth-grade class was mesmerized by our beloved Cardiac Pack* all March long, and every day-after-a-game, we rushed into class early to eagerly relive our favorite moments… until the fateful night when NC State upset Houston!! We could hear the celebration from Hillsborough St. as soon as we opened the front door at our house. (My brother and I were just reminiscing about this the other day — I really think it was the most exciting night of my whole life. And I still cry a little bit when I see the old footage of Jim Valvano racing around looking for someone to hug!)

When I grew up and went to Carolina (go Heels!), my only consolation about getting stuck in the worst dorm on campus was that it was across the street from the Dean Smith Center, so it was a one-minute walk to the games. And when I was a sophomore, my UNC Tarheels won the championship over Michigan (77-71!), and Hinton James erupted into screams and cheers until it was literally shaking from all of us jumping up and down. My junior year, the Lady Tarheels won on a beautiful last-last-last-second shot from Charlotte Smith and brought it all home. And just two years ago, the Carolina men’s team won the tournament again as I watched from Los Angeles! I am a lucky girl. 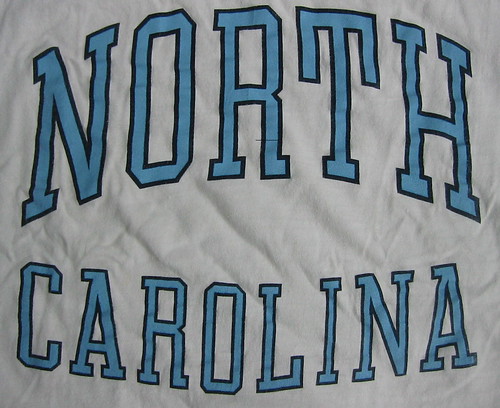 But it’s rough as a UNC-ACC-ABD (that’s anyone but Duke) fan on the West Coast — I hardly ever get to see any games during the regular season, since we have rabbit ears on our TV and not much else. And when it’s tournament time, the East Coast teams are always pre-empted by Pac 10 action on CBS. Last night was no exception, and my Tarheels battled Michigan State into submission without much help from me, since UCLA was playing at the same time and got all the attention!

Luckily, I have a cool, understanding husband who spent most of the second half of the game calling the play-by-play out over the phone to me while I hovered over my laptop, anxiously blessing out CBS; in Portland they showed UNC-Michigan State, while I languished in front of a glacially paced UCLA-Indiana matchup here in Los Angeles (which, ironically, finally turned into a nailbiter at the end, long after UNC closed the deal!). I kept one window open for espn.com and their nerdy 30-second refresh option so I could see the score no matter what. And my new favorite online find, the UNC basketball update blog, made all the difference.

Robbie Allen has pledged to cover every UNC game this season, and all I can say is thank goodness Google led me to him. I did a quick sweep through his recent posts and found links to all kinds of gems; Robbie recaps games, profiles players, posts previews and interviews from other sources, and adds great photos throughout. (Aside: I love that he uses “charity stripe” to refer to the free-throw line, I thought I was the only one!) The vengeful ABD fan in me especially appreciated the fire-Billy-Packer-already!! petition and Gregg Doyel‘s column indicting Coach K after the recent broken-nose combative foul situation (and yes, it certainly did make me think of the shameful 1992 Laettner incident, and in my opinion, Duke got exactly what they deserved in the first round).

So I have my fingers crossed for Friday’s game, and I’ll have UNC Basketball Update close at hand. And with luck on my side, maybe I’ll even track down the magical Woody Durham streaming radio broadcast online…

*I would just like to take a moment to shout out to Sidney Lowe here: the only person ever to both play (1983) and coach (2007) in ACC championship games. Love the red blazer, and I’m wishing you all the luck in the world in the NIT!