Home / art and craft / lots of things going on this weekend

This is something of an A-Z with a short shelf life, but here are a few cool things coming up fast that I wanted to mention today:

First, I found out about an anti-war rally here in Los Angeles, which I promised to follow up about after posting a couple of weeks ago — it’s tomorrow (Saturday, 3/17) at 12 noon: meeting at Hollywood and Vine, walking to Hollywood and Highland, which are both on the Red Line. I’ll be there, and I hope you will too. Ben Harper and Jackson Browne are playing, and it will also be broadcast on KPFK, 90.7 FM.

If you’re in Portland, there’s a big downtown march planned for Sunday. But if you’re free tomorrow night (Saturday 3/17), Contemporary Crafts Museum is having a big farewell party in their old space, a beautiful sleek modern building perched on a hillside on SW Corbett. I wish so much that I could go, but here I am in LA this weekend, so no luck. I adore the museum for many reasons, but mostly because Andrew and I got married there two years ago.

They’re reopening in July as the Museum of Contemporary Craft on the Park Blocks downtown, which should be exciting! But I’m sad not to get to see the space one last time. I did spend a really lovely afternoon there during the exquisite New Embroidery show last summer and that’s just going to have to be my good-bye. If you go: tickets are $25 at the door (includes drinks) and DJ Anjali and the Incredible Kid are performing.

If you’re a fan of Felt Club, you’ve probably already seen this news; the sale got pounded with $600 worth of fines from the city of LA since people accidentally flyered in the wrong places last year. So Jenny has organized an incredible sale: three huge, beautiful collections of handmade work, listed on eBay, and ending on Sunday. 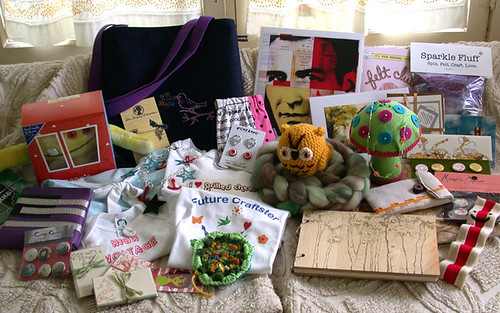 chocolate bunnies! surprisingly easy fancy dinner with a side of Star Wars