After one abruptly cancelled flight, two long lines, one re-booked flight I had five minutes to run for and promptly missed, and two more actual, successful flights I was actually on, I finally got back to LA late last night, via Seattle (nothing like flying due north to turn around and fly due south). Oh well, it’s not every day that a girl gets to set foot in all three continental West Coast states… even if it takes ten hours instead of two, and you end up in your least favorite airport on earth, without your suitcase full of Superbuzzy fabric, and your husband has to circle the airport in traffic for an hour-plus while you file a lost bag claim… ahem. But thank goodness, I am now home and I am not going anywhere by airplane for as long as possible!!

Tonight Cathy of California and I are heading to the crocheted coral reef installation/party hosted by the Institute for Figuring here in Highland Park. I missed their Hyperbolic Space show at Machine Project last year so I’m extra excited to check it out.

And speaking of crochet… I also learned how to crochet with wire this weekend from Sister Diane! Well, make a chain, anyway, and apparently that’s the basis to everything else — woo! There’s even photographic evidence that I can do it… 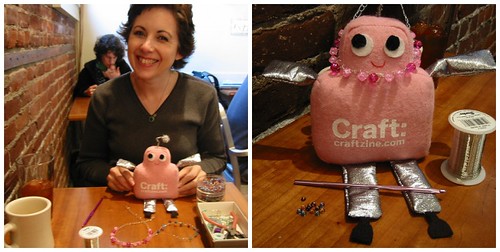 Diane and Pink Craftie, Pink Craftie modeling my very first crocheted necklace — hope she doesn’t get too attached, it’s for my mom

Diane also surprised me with the cutest birthday present: three colorful kanzashi flower magnets she made! So gorgeous. 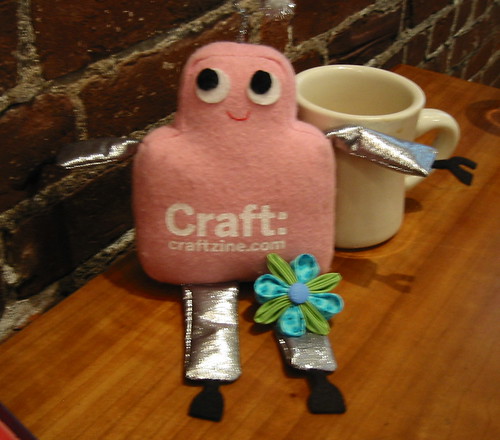 So at the rate I’m going, I might be able to crochet something with more than one row in the next decade or so. Hopefully.

Pink Craftie visits the coral reefs of the IFF Happy Year of the Pig!