I spent Sunday and Monday in Anaheim at the CHA show, seeing the sights and meeting up with a few crafty friends — it was amazing. The show filled five cavernous halls of the convention center and in two straight days of walking I don’t even think I got to see more than half of it… but I certainly gave it my best shot! 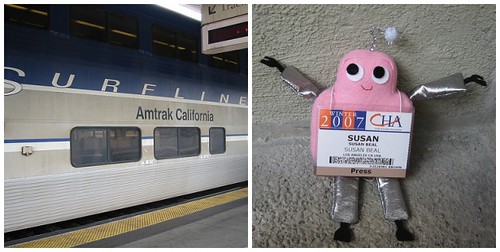 Pink Craftie and I took the train to Anaheim on Sunday morning and then got a cab to the show. My first stop (after picking up my press pass) was Kathy Cano Murillo‘s demo table at the Duncan Crafts booth, where I got to make a matchbook shrine. 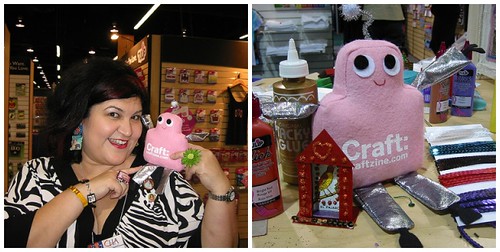 Duncan makes one of my all-time favorite craft supplies, Aleene’s Tacky Glue, so I was thrilled to get a sneak peek at some of their new products (a spray version? wow!)…

I also got to check out a bunch of other general crafts booths (which included everything from paints to jewelry supplies) and then headed over to the evening keynote event, headlined by Martha Stewart!

We got seventh row center seats, in a HUGE ballroom with immense screens all along the front/stage area. Martha came out to wild applause and spoke for about 45 minutes, mostly covering her craft projects from Martha Stewart Living and her other publications. She very briefly previewed her upcoming craft product line by showing a quick peek at the label style (which I unfortunately didn’t get a good picture of), but it looks most like the center image below…

…and she mentioned that it will be all be chocolate brown with off-white text and blue backgrounds. It seemed like everyone was really hoping she’d give more details of the new line (like what it includes and when it will be available), but that one little peek was all we got, and then she went back to talking about her favorite projects from MSL over the years and gave a few anecdotes here and there. I did find this more detailed recap from Michele and Kate of Photo Express about the private pre-show Martha did for her larger vendors, which is super interesting — looks like the products will be paper-crafts oriented, for one thing. The CHA show itself was seriously about 70% scrapbooking and paper crafts booths so I guess that makes sense, come to think of it.

One thing Martha said that really stuck with me was “‘Make it beautiful’ is the mantra I repeat to myself several times a day,” and the lush slideshow of the projects she’s done professionally and personally definitely reinforced her philosophy. She took a few questions at the end, thanked us all for coming, and left to rock-star-style cheering and clapping.

Her giant posters just outside were a hotspot for photos — lots of people lined up to pose with those after the show! Of course Pink Craftie wanted to get another snapshot with Martha too. 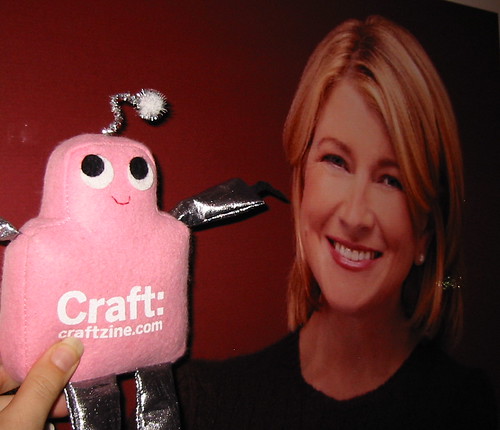 Then I got to meet up with Linda and Christina from Adorn magazine for dinner, which was lovely, and got a copy of the beautiful new spring issue! The shrink art jewelry, i-cord monogramming, and paper silhouette projects were all instant favorites. 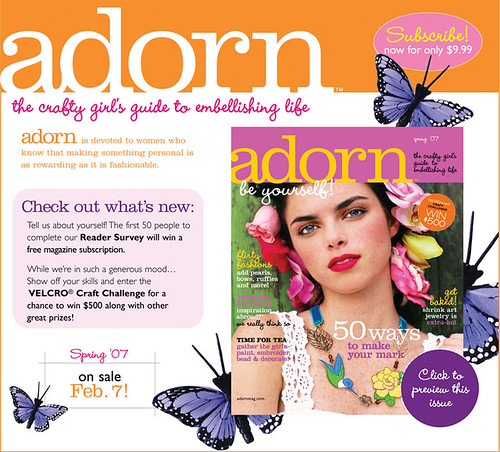 And they’re offering a $9.99/year subscription on their website right now, which is such a deal… wow.

On Monday morning, we met up with Vickie Howell and Jennifer Perkins at a breakfast party for a new designer jewelry book featuring tons of Jennifer’s pieces. Vickie is on a West Coast tour with stops in the Bay Area, Portland and Seattle… check her blog for all the details. 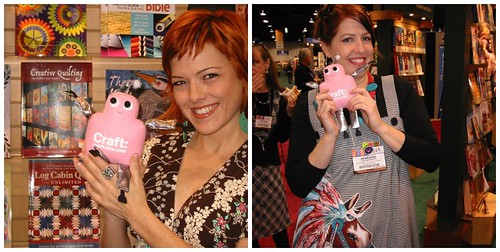 We walked the show for the rest of the day and then Pink Craftie got to have a joyous reunion in the press room with her CRAFT family — Sherry, Carla, and Katie! It was so nice to see them — a couple of hours earlier, Sherry and Katie had spotted Pink Craftie peeking out of my bag earlier in the afternoon and flagged me down in the New Exhibitors section, which was hilarious. 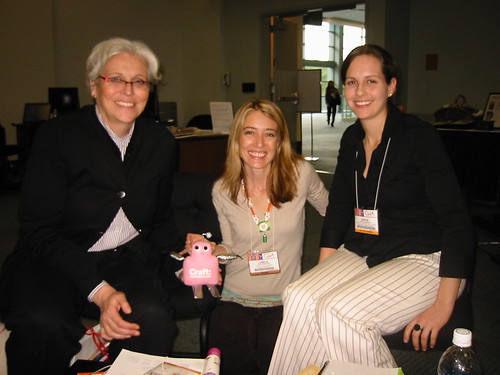 We went to a DIY Network party that night to celebrate their new book line, which was super fun, and then I headed back to LA late that night with 40 or 50 pounds of magazines and catalogs in tow, and collapsed into bed.

It was an incredible spectacle. I’m so glad I got to go! And I’m telling you, I can’t wait to try out that new tacky spray glue, I think it’s going to be so cool.