Home / craftivism / Do you have a dream?

When Andrew and I were walking around downtown San Luis Obispo last Tuesday afternoon, a writer for the New Times weekly paper stopped us to ask a question for their opinion page: she explained that every week, they ask four people the same thing and then print the responses in the next issue. Well, I have to admit that answering her question out of the blue nearly brought me to tears, and I’m about to cry now writing about it. I’ve never felt as discouraged about peace in the world in my lifetime as I do now, but I tried to say what my dream is and what I most hope for.

I have been so dejected about the war in Iraq dragging on and claiming so many lives, Iraqi and American alike, and hearing the news the next day that there are planned troop escalations was a miserable update. I really don’t know what the answer is, but I don’t think it’s sending more American soldiers there; I hope that they’ll be coming home instead. And I’m going to try to be more hopeful and less discouraged about it, even if some crying is involved from time to time.

So when we came back through SLO on the way home and stopped for dinner, I picked up a copy of the paper, and there was my quote… 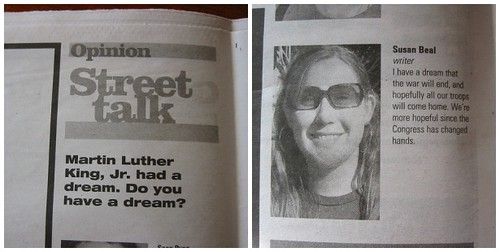 Today, in honor of Martin Luther King’s birthday, I’ve made a donation to United for Peace and Justice to go towards the March on Washington to End the War this month, on January 27, 28 and 29. I can’t go myself, so I sent a little money to help with someone else’s travel expenses. If you feel the same way and would like to support the march in spirit if not in body, you can get more information here.

I’ve also listed ten pairs of wood drop earrings in my etsy shop, and I will be donating the entire selling price ($10 each) to United for Peace and Justice as well, with free worldwide shipping. Any sales before January 27 will go to the travel expenses fund so that the most people possible can come to Washington, DC; any sales after that will go to their general fund. 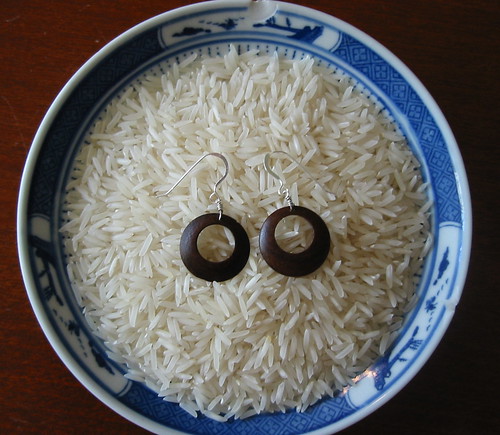 Tomorrow I’ll be writing about crafts again, so I hope you don’t mind the foray into politics. I just couldn’t be quiet about my beliefs today, especially after reading this post:

“History will have to record that the greatest tragedy of this period of social transition was not the strident clamor of the bad people, but the appalling silence of the good people.”
-Dr. Martin Luther King, Jr.